on May 21, 2012
It's Monday! Which means it's time for an update on gardening the Flylady way = gardening in babysteps and using a timer.  We've just had a lovely long holiday weekend with lots of time spent in the garden.  ======   Um, isn't that what I wrote two weeks ago?!  Yes, Denmark was closed yet again on Thursday for Asencion.  And the schools and some workplaces were also shut on Friday.  So we've been spending rather a lot of time in the garden.  And finally enjoying dinner out on the deck...


Thanks to my Flylady routines ('lawnmothering' at least once a week, weeding the flower beds every other week, sweeping the paths regularly etc), our garden is looking pretty good.  Hooray!  But now that we've got sun + a bit of heat, a bitter enemy has reared its ugly head...dandelions!  Gah!!!

Well, they didn't get here in a day.  (If I'm truthful, we haven't done anything about the ones in the lawn since DD10 was born...)  And they're not going to disappear after a weekend's hard graft.  I started off by doing a Flylady '27 Dandelion Fling Boogie' but kept losing count and the will to live.  So now I'm concentrating on one area at a time and attacking them 15 minutes at a time.  Going only after the obvious ones where there are yellow heads, because I like to see them disappearing - and I need a sense of achievement! ;o) 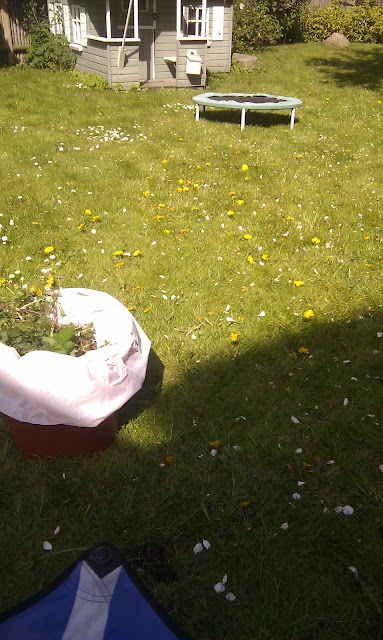 I can't remember how many bucketfulls of dandelions I've squashed down into the garden refuse containers this weekend.  But if I say 20 bucketfulls, I wouldn't be far wrong... 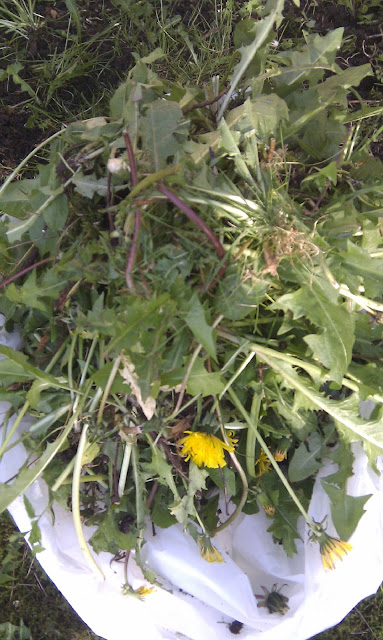 I had a bit of a perfectionist moment this morning when I went out to do the 'lawnmothering'.  "I can't possibly mow the lawn because there are still yellow heads peeking up!  I need to remove the dandelions first..."  Then I slapped myself on the head and said "No, lawnmowing is a weekly routine.  Do that as usual.  And then - and only then - can you go ahead and declutter the dandelions."  So that's what I did.  Didn't hyperfocus.  Got my routine work done.  Because the dandelions aren't going anywhere fast are they?

The lawn looks fairly good again and I feel a sense of achievement.  Time to get my purple gardening gloves on and keep chipping away at the dandelions.  Check back next week to find out if I'm winning the war...

Have a marvelous Monday! :)