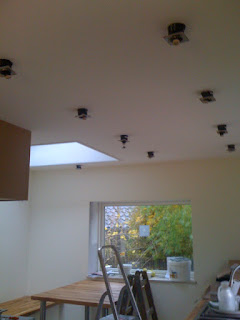 The kitchen is R.E.A.D.Y and we are open for business! Yay! Double yay! :)

After 9 weeks of washing dishes without a sink I've been allowed to come out of my camp kitchen in the basement and back up to the ground floor and into the light... Or semi-light, I should say, because we don't have any spotlights working at the moment. Fault in the electricity cables... No wall lights or floor heating either :(  But not to worry, the electricians are here (Monday morning) and think they have located the cable in question. [slaps thigh and shouts 'hooray' in good old pantomime style]

I was allowed to run around naked in access to the kitchen last Wednesday night. DH was working late and DD7 was at a classmate's house for play/dinner club. DS9 and I were supposed to be going out for sushi but we got a takeaway instead and christened our new dining area :) The whole idea with the new kitchen was to give us space to sit and eat - something that lacked in the old kitchen.

To be perfectly honest, DS9 was actually rather relieved that we weren't going to sit in the sushi restaurant where the drive-by shooting took place... Anyway, here we are, pleased as Punch...and the sushi was magnificent as always! 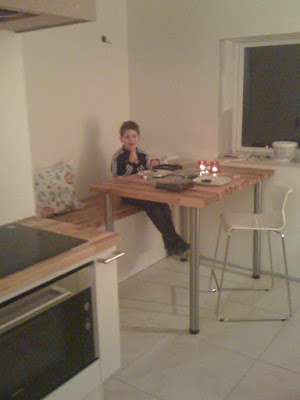 There were no builders/electricians/plasterers/painters here last Thursday or Friday. Which suited me down to the ground because I wanted to move my stuff back in there and just enjoy my new shiny sink. Complete with pull-out hose and light on the end of the tap: 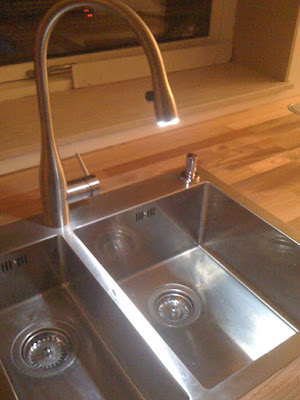 Have to admit, aside from being very fancy, the tap light seems to have hidden telekinetic powers and makes young children want to help... 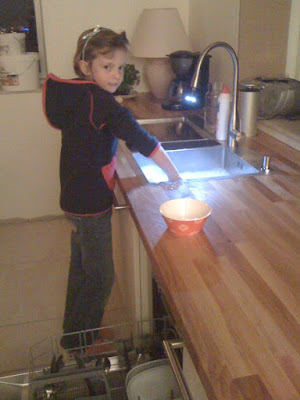 I've posted a new video of the kitchen on youtube so you can compare the new to the old. Or maybe you want to see how it looked, halfway through the remodel? Hope you enjoy. And there are plenty of new pictures over at picasa. 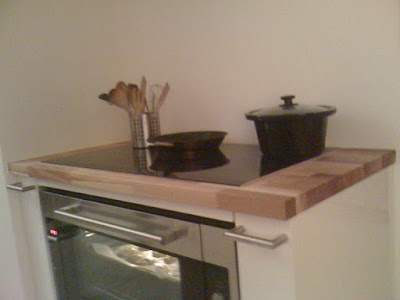 And what now? Well, we've already done a lot of baking in the new oven. DKs are enjoying the new fridge/freezer immensely judging by the amounts of cold water and ice they are consuming. I still need to figure out the new hob (which can apparently fry a perfect steak all by itself with no adult supervision) but the dishwasher works just fine and even shines a little red light on the floor, so I know that it's running. Technology. Gotta love it!

Tune in next Monday. When we're - hopefully - in the home straight. Who knows, the two of us might even have a chance to be alone..? ;)
kitchen