With the excitement of Eurovision behind us, my kids are now eagerly counting down to the strangest day on the Danish religious calendar.  Okay - let's be honest - they're really just counting down to yet another day off school! ;)  On Friday they'll be able to have a lie in because it's Stor Bededag.  ’Big Prayer Day’!  Yep, those crazy Danes decided back in 1686 that there were just too many religious holidays during the year.  So they lumped the minor ones together, four weeks after Easter, and - voilà - Stor Bededag was born.  Big Prayer Day was traditionally a time to fast and pray.  And, though I’ve yet to meet a Dane who willingly goes to church (apart – selvfølgelig – from christenings and weddings), a lot of Danes will be attending church this Friday.  Not for regular church services but for confirmation ceremonies.

Want to know more about Danish confirmation and Blue Monday that follows it?  Then go read my post "When Blue Monday isn't New Order!"

But the biggest tradition associated with Stor Bededag is eating hveder on Thursday night.  What are hveder?  Large, fluffy, pale, basic white bread rolls which you halve, toast and butter.  You'll find them on sale at the bakers but be warned that - despite their modest ingredients - they don’t come cheap!

I gave up queuing for them at the bakers years ago and just buy the ready-made ones from the supermarket.  Best enjoyed warm with a nice cuppa! :) 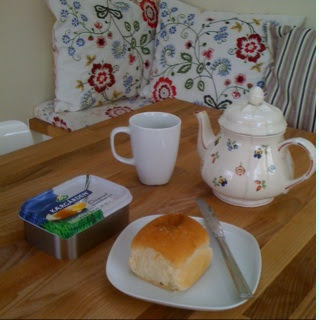 After you’ve had your hveder, you’re supposed to go for a stroll around the city ramparts at Kastellet (Copenhagen Citadel).  You don’t live near Kastellet?  Well, sit back, relax and enjoy Denmark’s finest rock band, Magtens Korridorer singing about a picnic at the Citadel…  (If the guy pretending to sing in the video looks familiar, it’s Nicholas Bro, an actor who was in the The Killing (II) and Borgen…

Personally, I'm praying for dry skies. We've had torrential rain here in Copenhagen for the past three or four days. Enough already!