on February 03, 2011
Is it already February?! Here's this week's menu - old family favourites and a few new things...
* Quorn fillets (straight from the freezer) covered with tomato sauce (straight from a jar) and peas (straight from the freezer) and baked in the oven, served with wholemeal spaghetti
* Pork barbecue chops (made in the crockpot) and brown rice made in my ricecooker, carrots steamed on the top of the rice in the ricecooker
* Warm beef teriyaki salad: I steep cubes of beef in teriyaki sauce and flash fry them. The other 'salad' ingredients are chinese noodles, sliced cucumber, carrot 'shavings', yellow pepper and fresh spinach. Sprinkle peanuts on the top. Yum! :D 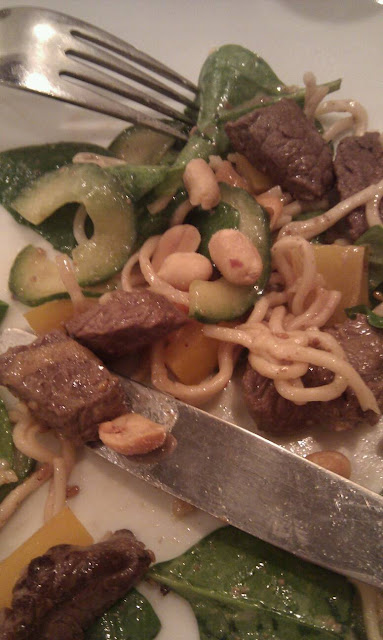 * Veggie burgers on homemade wholemeal rolls, veggie sticks on the side
* Roast chicken legs with nachos (tortilla chips with cheddar cheese, sour cream, salsa, guacamole) and a large spinach salad. Dessert is cinnamon apple crumble (apple crisp, I think, to the yanks?) with cream and icecream.
* DS11 has discovered the joy of enchiladas and, more importantly, can make them himself! ;D He'll fill the tortilla wraps with minced beef/kidney beans. (I'll liquidise the beans first, so the kids can't see them in with the mince...)

* And last - but not least - a day where we eat leftovers or 'lunch for dinner' = smørrebrød or madder (Danish open sandwiches).
Bon appétit and happy 'Little Friday'! :)
menu planning