on September 02, 2010
The other night I was rebelling and staying up late. Waaaay past my normal 10pm midweek bedtime! ;D

I zapped around a few channels and found a detective series. Now, you have to realise that I love anything to do with detectives. I wanted to be a detective when I was a child. Loved secret codes etc. Used to dress up in disguise as an OAP and walk around the block, hiding messages between the cracks in walls.

Here I am around the age of 12 (I think). I'm the one on the left. Tee hee, now that I look at this again, I can see my friend L. (a girl) has bits of paper stuffed into my Dad's sandals, so that they wouldn't fall off! 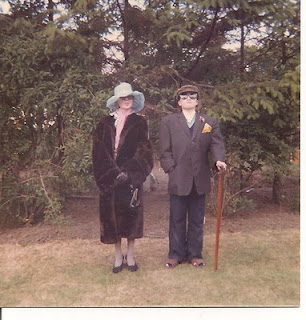 I read all of Agatha Christie's books as a child. And, naturally, the Enid Blyton mystery books for kids... Loved "The Five Finder Outers" series, didn't like "The Famous Five". But, as usual, I digress!

I zapped on to a detective series called "McBride". Now, I've seen a lot of bad tv detective series but I have to say that this has to be one of the worst! Crummy acting, bad plot, slapstick humour...which, of course, meant that I was glued to the screen until the very end!  ;D

Anyway, as they say in Danish, "Der er ikke noget så skidt, at det ikke er godt for noget". Which more or less means "There isn't something so bad, that is isn't good for something." And this terrible detective series made me want to sit down and write a list of all my very favourite ones! So here you have it...

As you can see, I like a bit of comedy along with my crime. If I've missed out a good series, let me know?

C-Joy said…
I would add the Mrs Bradley Mysteries with the divine Diana Rigg! I soooooo wanted to be Emma Peel as a teenager :-P
Thursday, 02 September, 2010

Sassy Jen said…
Oh Diane! You and your friend are too cute!
Thursday, 02 September, 2010

Lorry said…
There are only three episodes so far, and no more for another year (eep!), but I'm already a fan of Sherlock!
Thursday, 02 September, 2010

Asfora, we can have a game of Cluedo ANYTIME - my favourite boardgame!!

Elisa: I love Diagnosis Murder...apart from any episode with Dick van Dyke's son as His Son!

Lorry: I haven't seen the new Sherlock. Yet! Thanks for the heads-up! :)

Archaeogoddess said…
I love Midsomer Murders (DR 1, Saturday evenings as Kriminalkommisær Barnaby). It sums up all that I love about murder mysteries - beautiful English countryside, eccentric characters, ridiculously high body count. What can I say, I was raised on Agatha Christie and Sherlock Holmes (I had such a crush on Jeremy Brett, please don't judge me). I was also a huge fan of Father Dowling mysteries, I wanted to be Sister Steve so badly. Gave me a completely skewed vision of the Catholic Church, let me tell you!
Friday, 03 September, 2010

Teri said…
I too am a big mystery fan! Besides most of what you listed, I also enjoyed Perry Mason, Dragnet, Columbo, Quincy ME, Magnum PI. Oh, and Hawaii Five-0. "Book 'em Danno!" :D

As a child, I enjoyed the Nancy Drew, Hardy Boys, and Trixie Belden books. I just devoured those books!
Thursday, 09 September, 2010

DIANE, DENMARK said…
Hi Archaeogodess! Your comment had me in stitches because I *always* watch Barnaby! Saturday nights in Denmark just wouldn't be the same otherwise, right? ;D
Friday, 10 September, 2010

I'm thinking maybe my DS10 might like to read the boy ones - or maybe they're far too old fashioned now?
Friday, 10 September, 2010