on September 13, 2010
Apples are now falling from the two trees in our back garden faster than we can pick them up (eek!) and what better way to mark the occasion than a spot of baking? Apple crumble, apple puffs, apple cake? Which sounds all very homely and seasonal and warming and romantic. Except it was Friday afternoon and I was e-x-h-a-u-s-t-e-d after a long week. But, as usually happens (though not always when you most want to hear it...), Flylady's voice came out of nowhere and said "Set your timer! You can do ANYTHING for 15 minutes!".

So that's what I did. Instead of counting down from 15 minutes, I counted up. To see how long it would take to get the darn cake into the oven... (If you want to play along, the apple cake recipe is on my blog here. After a little story about Emilie cracking the reading code...) Back to the recipe, which is now on my kitchen counter. Three seconds already on the clock, let's move! 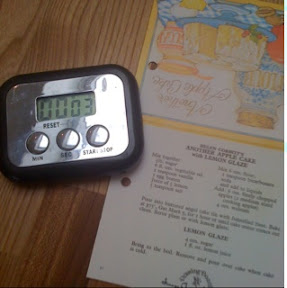 Here I am mixing the first ingredients together (sugar, oil, vanilla, eggs, lemon juice, salt). Three minutes on the clock. 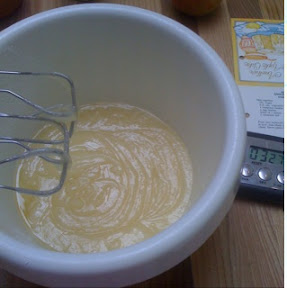 Mixing in the flour and baking soda. Five minutes and eight seconds. 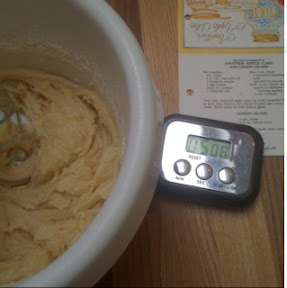 Now for the job which I think is going to take f-o-r-e-v-e-r. And, if I'm perfectly honest, the reason why I didn't really want to make the cake. Peeling and chopping the apples. Ugh. 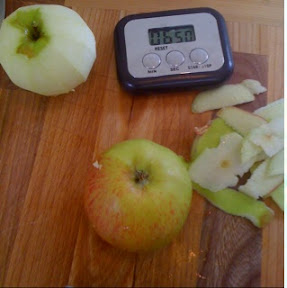 ...which didn't take nearly as long as I thought. Of course. Three apples peeled and chopped and I'm still only at nine and a half minutes :) 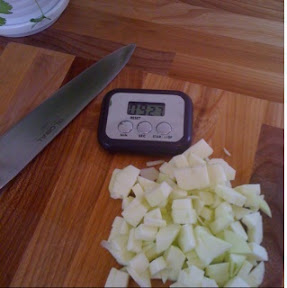 One minute later and they are mixed into the cake and we're ready to bake this baby! 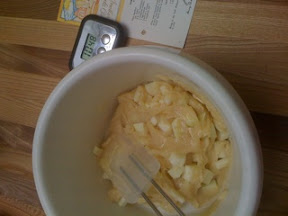 I've prepped the funnel cake tin with a bit of butter/oil, so it doesn't take me another 15 minutes to get the cake OUT of the tin... ;D 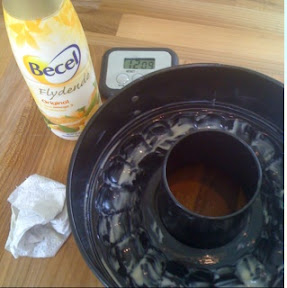 Maybe I should do the kitchen clean up NOW and THEN sit down with a cuppa while the cake bakes? Time taken 3 minutes and 40 seconds. Shiny sinks of the world unite! :D 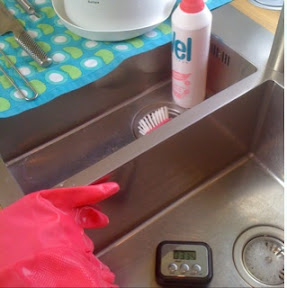 Oh, you want to see the finished product, do you? Voilà - here it is! (Recipe is here, remember.) I love lots of white icing on the top of things (yep, it's a Scottish thing) but you could just leave the cake as it is... 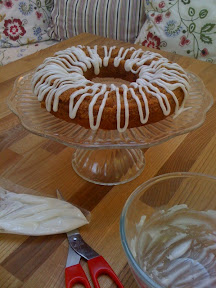 On Saturday we got a phone call from (good) friends asking if they could (hint, hint) pop in and see us. Which basically translates as: we're inviting ourselves round for dinner. To which we could reply: Yes, because we have cake! Yes, because dinner is already planned and we've got extra food in the cupboards! Yes, because the house is shipshape!


PS: If you're wondering where my official Flylady timer is...it got pinched and is currently on DD8's desk. 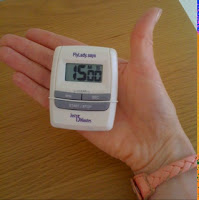 Sassy Jen said…
Shiny sinks of the world unite! I love your humour!

Looks delish Diane. DH does the baking with the apples here. The most I've done with apples and an oven is to make them look like shrunken heads...Perhaps I should expand my repertoire...
Monday, 13 September, 2010

Helen said…
Wow! I really thought making the cake would take more time. I sometimes use my timer too. The cake looks very good.
Monday, 13 September, 2010

JoAnna said…
What an awesome feeling to have have a clean house, dinner (and tasty dessert) for family and guests. Terrific! :)
The white icing is pretty. I'll have to try that this fall.
Monday, 13 September, 2010

DIANE, DENMARK said…
Aww, thanks, girls! Thinking that tomorrow I might make Apple Puffs...if I have time! :P
Monday, 13 September, 2010

Unknown said…
If icing is a Scottish thing I'm moving to Scotland.

Teri said…
The cake looks yummy Diane! And it didn't take as long as I would have thought either. I guess that means I have no excuse to turn some of our apples into cake too! :)

BentoBoxUK said…
Inspiring! Well done on getting those apples into the cake - the results are fab!
Thursday, 16 September, 2010

C-Joy said…
Yet another Super Genius idea from you! Now I want to bake something just so I can time myself. Maybe we should create "No Excuse Baking" :-P
Thursday, 16 September, 2010

DIANE, DENMARK said…
Thanks for all the comments! :)

You lot have inspired me to do another round of 'No Excuses Baking", as Candace calls it. See today's post - All Bran Muffins! :D
Thursday, 16 September, 2010