on May 05, 2010
There was a lot of talk on Danish radio this morning about the American documentary "Food, Inc.", which has its premiere in Danish cinemas today. A commentator remarked that, even though the food industry in Denmark is far (far!) removed from what's portrayed in the film, it doesn't mean we should sit on our (for the moment, at least, small) Danish bottoms :)

Here's a little post I wrote last August which I think deserves another airing today.

Hope you have a wonderful Wednesday. Enjoy - in small quantities! ;)

PS: Just for the record, I wrote this sitting in a Joe and the Juice bar in the centre of Copenhagen, where I scoffed a 'Pick Me Up' and a Grilled Avocado Sandwich... ;) 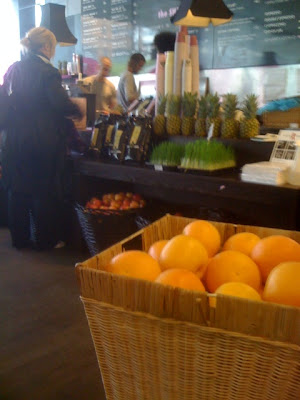 When we were on holiday in France, we had lunch at Macdonalds. Doesn't matter where in the world you go, you know what you're getting at Macdonalds, we joked. But are things really the same the world over?


I told DS9 that I had heard someone on the radio talking about drinking sodas/fizzydrinks from Macdonalds and that the size was 48 oz.


Now, when I heard that on the radio, I actually thought I had misheard. Went to the kitchen and got out my Pyrex measuring jug and worked out how much that is. 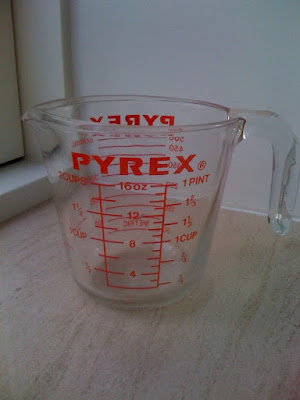 That is three times what my Pyrex jug holds. If I convert it to European measurements, it gives almost 1.5 litres of liquid. Which is a 'family' sized bottle of cola for your typical Danish family. Something they might open on Friday night and expect to last the whole weekend - for the whole family. 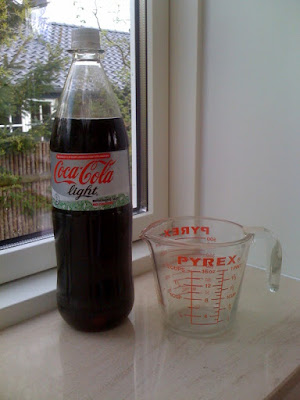 Blinking hell, no wonder people are overweight if they are drinking those amounts of fizzy drinks! LOL Granted, that is the largest size available (and, of course, not everyone, orders the largest size) but it certainly gave a good family discussion about eating habits and food pyramids, not to mention what fizzy drinks can do to your teeth... On a side note, Danish children take a water bottle to school, and that is usually what's in it.
For good measure (if you excuse the pun), we checked the largest size of a soda/fizzy drink at Danish branches of Macdonalds. The largest size available is 500ml, which amounts to about 17 oz or approximately one Pyrex measuring jug.

Unknown said…
I remember as a child here in the states getting a "large" meant a big cup like mommy and daddy. Sometime during my high school days ordering a "large" meant the waitress placed a bucket of Pepsi in front of you. Seriously. It was huge. Over time the LARGE cups actually became shaped like cups, but you're right...it's A LOT. Sadly, I know ppl who order everything king size (the biggest size at Burger King), get an extra "sandwich" with those meals AND dessert and eat/drink it all in one sitting.

Yes, they're overweight. Fortunately, (I don't know about Europe, haven't been there in a while) now McDonald's and Burger King have other options available. Like apple slices with caramel sauce (we dont' use that), milk, can't think what McD's has at the moment...but they're healthier.

And my kids and I? Never finish the whole thing! ((0.o)) Also...In Denmark do you have the teeny tiny refrigerators like England or the wardrobe sized ones like the States? (also worth a comment)
Wednesday, 05 May, 2010

Sassy Jen said…
The movie Supersize Me scared me more than any horror film. The smell in the air is sickening when driving past the golden arches.

My DS6 was invited to a Bday party and when told that it was being held at McDonalds, asked why they would go to a place that had "crappy food".(his words- my bad) Luckily my friend laughed and replied yes the food isn't good but there is an indoor play structure for the kids to be entertained. My son seemed fine with the explanation but refused to attend the party.
Wednesday, 05 May, 2010

DIANE, DENMARK said…
Hi Elisa! Thanks so much for taking time to leave a comment :) The portion sizes really do seem to be sooo different, don't know why that should be?

We actually had a new kitchen put in at the end of last year (I wrote about the remodel every Monday for 3 months here on the blog) and we got a huge new fridge. In Danish that type of fridge is called an "Amerikaner"! LOL
Wednesday, 05 May, 2010

DIANE, DENMARK said…
Hi Jen! Gosh you have a clever little boy...not sure many 6 year olds would be able to resist the lure of McDs! My DS10's favourite food is now sushi - which is great, apart from the cost! ;)
Wednesday, 05 May, 2010

I checked out what a "large" is on the McD's US website, and apparently a "large" now is 32 fl oz. which is 1 quart (US anyway, I don't think that translates to UK measurement) It's about a litre, at least according to my pyrex cup ;)

Personally I can't fathom getting that size, unless I planned to sip at it all afternoon!

Also, do consider that in the US, all of our fountain sodas are FILLED to the brim with ice before any soda is put in. I remember during my time in Europe that the sizes were smaller, but typically no ice.

We go as a family to McDonald's about once a week, (usually less, but that's a good average) 99 times out of 100 I would be getting a "small" (16 fl.oz.) diet Coke, and that fountain soda is a special treat let me tell you.

For the record, yes, there is ice in the drinks here (unless you request no ice).