Stand up, Sit down, Sing Along!

on April 14, 2010
We're coming into 'confirmation' season when young Danes (usually 13 years old) become full members of the Danish church. For their families, this will mean being inside a church for the second time this year (the other being Christmas). As I've mentioned in a previous post (Wednesday in Wonderful Copenhagen - Part Two), the Danes aren't big churchgoers. Apart, of course, from Christmas, when churches have to bring in extra chairs to cope with demand. I kid you not. Been there, done that. Sat on a folding chair in middle of the aisle! :)

Tjek på Traditionerne (Keeping up Traditions) is a fantastic Danish satire programme, one of my all-time favourites. Click here to see their Christmas special (I'm crossing my fingers you can watch this episode outside of Denmark), where they, amongst other things, order tickets through an agency to make sure they get a front seat in the church at Christmas. I'm still tee-heeing at these two comedians 10 years later ;) If you can't see that clip, there are two (only two, sniff!) on youtube. The first is a council meeting about naming streets (which according to a directive should reflect Danish culture...), the second is about drinking and driving (and running away from the police to work off the alcohol...) But, as usual, I digress! 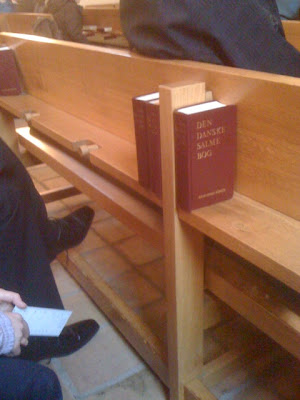 I was saying that the Danes aren't big churchgoers. And when they do go they certainly aren't big singers. Personally I think they've got the whole technique thing wrong. In Scotland you sit down to pray and stand up to sing. Here in Denmark you stand up to pray and sit down to sing. Isn't it easier to sing standing up? Any singing teachers out there who want to back me up? ;) 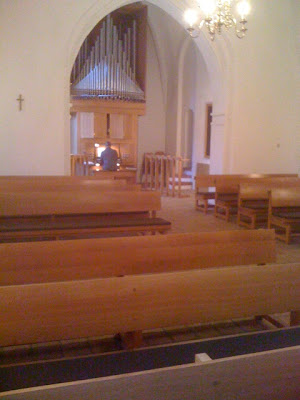 Anyway, to be honest, the Danes don't really sing. They mumble the words. But they seem to have solved the problem by the use of kirkesangere (church singers). Professionally trained singers (2 years of study) who are employed (paid) by the church. Who come and sing in church for Sunday services and funerals (Saturdays for christenings, weddings and confirmations). Yep, once again, those crazy Danes have it all organised ;)

But - as Monty Python said - now for something completely different. A (new-ish) Danish rockband, Black City. I downloaded their single "Summertime" to my phone from iTunes at 7.15 this morning (because the sun was shining and the kids gave it the thumbs up). Youtube video is here - enjoy. Just make sure you turn it up to 11...

Have a wonderful Wednesday! Don't forget to sing along now ;D
church Denmark those crazy danes

Lorry said…
I'm American, and though I'm no longer religious at all, I was raised in it. I went to a christening last year and was really surprised about the backwards standing/sitting thing! I don't know that I can quote any research about benefits to singing standing up, but I can back you up that Danes are weird! ;)
Wednesday, 14 April, 2010

Sassy Jen said…
Different churches have different protocols but most here are stand to sing and sit to pray. I call it doing The Hokey Pokey.

It is better to stand while singing, but if you must sit, sit straight up with your chin up and out so your voice can be strong and carry. Don't forget to breathe.
Wednesday, 14 April, 2010

Glad to see I'm not the only one who thinks its odd :) I'm seeing a friend this weekend (who's a church singer), so I'll make sure to get the inside story from her!