on March 08, 2010
In last Mondays's pamper post, I announced I was on the hunt for some new running gear. Hey, I deserve to look good out there! ;) 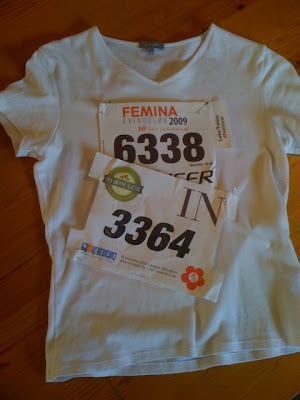 Not just any old thing. Some new stylish and flattering sports tops in my seasonal colours. Thanks to Missus Smarty Pants colour analysis, I know that I am a spring - guess what, it's also my favourite season! :) So I went into town last week and trawled the major sports shops and department stores. And came up with...nothing! Who knew it would be so difficult?

I thought it might be easier finding something online. After all, there are plenty of Danish catalogue companies these days that sell major sports brands like Adidas, Nike etc. But then I did that old SHE thing of getting sidetracked by the computer and - several mouse clicks down the line - I was in the virtual nightwear department looking at new jimjams instead! Which, by the way, are another thing I have difficulty finding. Have you ever found stylish sleepwear? This big, old Danish house is too cold for wearing nighties (unless it's high summer) and I refuse to walk around with Snoopy or any other cartoon character on my pyjama top. That's something my children do! ;)

So I'm back at square one and still wearing the same old, same old... I'm thinking that I probably need to change tack and cast my net a bit wider. Maybe look for flattering t-shirts in good colours first, and then make sure that they're in a suitable fabric for running. (Or sleeping, for that matter.) 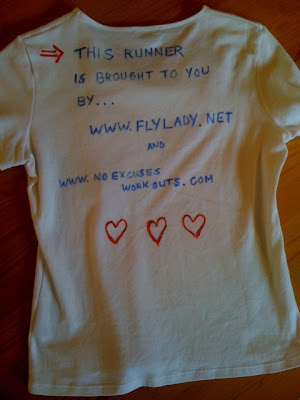 So the hunt is still very much 'on'. And I haven't given up hope! Hope you all have a marvelous Monday! :)
Missus Smarty Pants pamper running

I also took the same felt marker pen and wrote FLYLADY on one of my arms and NEWO on the other. When the going got tough, I just keep looking at the words and kept moving my little legs! ;D
Tuesday, 09 March, 2010

As SHE's it can be sooo easy to get off track when shopping.

Finding suitable workout gear is a tough one. I'm a bit of a rebel so I actually ended up looking at tennis clothing to bike and run in since much of the specialty gear I didn't care for. The skorts offer great coverage and are made from wicking fabric for comfort. Plus, they are cute. I do have pants for colder weather though I tend to stay home those days. Wimpy rebel am I!

No pj's seem to be available for grown women without some kind of "cutesy". My girlfriend did buy her flannels with a moose print all over but she is a hunter so I gave her a free pass.

Good luck with your search. I think colours first is a good start. The rest will fall into place when it can.
Tuesday, 09 March, 2010

DIANE, DENMARK said…
Hi J, good idea about the tennis gear. There are some speciality shops around these parts - will check them out. Thanks! :)
Wednesday, 10 March, 2010

Candice said…
Hi Diane, I'm new to your blog from MissusSmarty Pants. I think we'll get along great because I also love FlyLady.

As my new friend, I'll share with you where I buy my sleepwear; Peter Alexander. He is an Australian designer who started with catalogues and internet and now has a couple of stores. I'm sure he does international postage.