on November 11, 2009
Emma asked me yesterday about how my DKs (dear kids) Danish school deals with 'unpleasant behaviour' amongst the pupils. There are no doubt lots of internal guidelines and tactics but I think our school do it best by trying to stop it even starting...

We're told encouraged at the very first Parents' Night in first grade/primary one to elect a Festudvalg (Party Committee) for the class. Four or five parents who volunteer to arrange social activities for the kids and their families. They've used this system at the school for the past few years and it help stops bullying amongst the kids. The theory is that a good social network inside (and outside) the class makes for a better learning environment. Happy kids learn better! :)

It's up to each 'Party Committee' to decide the frequency and nature of the get-togethers. I've been on Party Committees for both DD7 and DS9 class (and their nursery too). We've had family gatherings at the local Deer Park (sledging in the winter and picnics in the spring), a mini Olympic Games, potluck dinners at school, bowling and iceskating in the centre of Copenhagen. 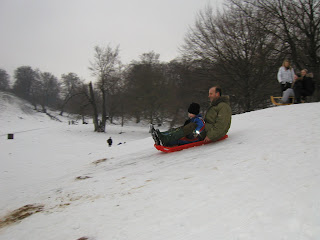 A couple of weeks ago DS9's class organised a dinner at school. One child plus one parent were to be at the Home Economics room on the Friday afternoon at 4pm. We were split into teams who would make: a starter (tuna mayonnaise), main course (burgers and various salads) and dessert (homemade pancakes and sorbet) - the children were to make the food, the adults were there for supervision. Two more teams set tables and organised the drinks bar. The rest of the family was invited to come and eat at 6pm. The evening was a huge hit and the food was pretty good too! ;)

These activities give us more time to talk than in just passing when we deliver or pick up our kids. Which in Denmark takes place inside the school classroom or After School Club, not at the school gates. Plus if you have, say, a boy, it's nice to get a chance to meet the girls in the class... And if and when problems do arise, it's so much easier to be able to talk things over face-to-face instead of phoning someone you've never met.

But I think the real key to success are our (infamous) Parent Parties. No children - just adults. A chance to let your hair down and really get to know the other mums and dads. They invariably start with very civilized talk about the kids, then the food is consumed, the drink starts to flow, the music is turned up and the carpets are rolled back. Yep, those parents can sure party. Though I'm getting just a teensy bit too old for those 3am finishes... ;)

Thought I should tell you that today DS9 is off on a school trip with the boys in his class (3rd grade) and their 'micro-buddies' in 0. grade (kindergarten). It's a bonding trip for the boys - the school is taking them to see the Danish national football team who are training for a friendly match on Saturday against South Korea. Note from the school says to pack a picnic lunch, water bottle, autograph book and pen... ;)

And I'm just about to put on my lippy....because there's 'Parents' Coffee' at the After School Club today. Guess I'd better go and be sociable! ;D
Denmark Emma

Lori said…
Hello Emma. I just found this via Google. I'm a parent of a first grade girl here in California in the United States. My daughter's class is studying Denmark to present what we learn to the rest of the school during "Travel Week" in May.

Are you a teacher in Denmark? I'd love to build a connection between our first grade class and a Danish first grade class to learn more. Our teacher just left suddenly last week so I'm helping lead these efforts until a new one is established.
Thank you!
Lori B. Warren
Redwood City, California, USA
Saturday, 22 January, 2011

DIANE, DENMARK said…
Hi Lori and thanks for stopping by! :)

I'm not a teacher but if you go take a look at http://denmark.dk I'm sure you can find help. They also have a facebook page http://facebook.com/denmark.dk where you can post a request. Good luck!