Fangs for the memory

on August 18, 2009
Today I went to the dentist. Dentists and I go a long way back. Though I could certainly see them far enough. (Insert a big 'ho ho' here.)

Starting with the school dentist, where Mum claims I had a gold sticker at the top of my appointment card to show that I was a 'special' customer (read "terrified"). I still shudder at the thought of walking down that little alley at the bottom of Leith Links in Edinburgh. Not off to a good start.

When I grew up and got a job in my 20s, I was able to choose my own dentist. (General healthcare is free in the UK, but you pay for dentistry from the age of 18). I worked my way through several but finally found one which was close to my office near Broughton Street. The main attraction was being able to pay for (I kid you not) laughing gas. If I remember rightly, it cost £15 for a session - cheap at half the price! Certainly beat having to have an injection and was much more fun. Also taught me that Nancy Regan was right when she said "Just say no to drugs" - I reeeeeally enjoyed those sessions and did NOT want to come back to reality. There was only one side-effect, and that was that the gas took a while to wear off again. So I must have looked like an utter loony, grinning inanely at strangers on Leith Walk on the way back to the office.

Moved to work at the European Court in Luxembourg and the hunt was on yet again for a good dentist and doctor.

My first doctor there was called Dr Goerts (a Luxemburger). His receptionist spoke with a guttural 'g' which meant that she answered with phone with a "Hello, Dr Hurts" to which I, with my childish sense of humour, longed to reply "I do hope he won't". But I didn't. (And I suppose I should add, he didn't either.)

It was in Luxembourg that I found my best ever dentist. He was the dentist of my boss (the British Judge) and was a Dane by the name of Hans Ågerup. His (very sweet) wife helped him and the reception area had a large collection of Danish magazines and children's books. I actually used to turn up early for my appointments because I saw it as an opportunity to use what little Danish I had learned by then, and do some reading practice. :) (I was, as you will no doubt have guessed, dating my Danish DH by this point.)

Hans Ågerup was very patient, quietly spoken, extremely professional and explained EVERYTHING he was doing. I was completely at ease and didn't have to resort to my usual calming trick of looking up the dentist's nose... ;)

Got married, moved to Copenhagen and the hunt was on again. I saw an article in "Politikken" (Danish broadsheet) about dentists who had alternative methods when dealing with nervous patients. One in particular caught my eye. Jens Bjerregaard (and his better half, who also sits in reception) of Hellerup, who has draught beer in his waiting room. 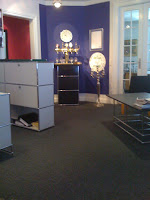 In fact, not just one but several. You can just help yourself, there are proper glasses and beermats on the counter beside the beer taps. A band even comes and plays when the Christmas beer arrives. He claims it calms the patients and smells better on their breath than coffee. Who am I to argue?


I've been a patient there for 3 or 4 years now, but don't normally partake of the free booze. Mostly because I'm always there first thing in the morning (apparently it's quite busy in the afternoons). Though last December I did have a small glass of Tuborg Classic (an ale). It was just after a lengthy operation (not to mention an anæsthetic that would knock out a horse) on my lower jaw and Mrs Bjerregaard even kindly provided a straw. Now that's what I call a good dentist.
Denmark dentist European Court of Justice Luxembourg